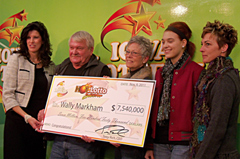 Mary Neubauer of the Iowa Lottery presents Wally Markham with his prize.

A retired John Deere worker from Waterloo bought a round of drinks for friends at his favorite watering hole, but says he doesn’t have many other plans after winning a Hot Lotto jackpot of just over seven million dollars.

“I said I won, he said ‘that’s all you’re gonna say,’ yeah I won, what am I gonna do about it,” he said. Markham later want to a local bar called Smitty’s where and the bartender was speculating about who won and he told her it was him. He says he then had to buy everyone a round.

He says he told everybody and “there on in it cost me a fortune.” Markham retired from John Deere in 2002 after working there for 36 years. His girlfriend Vicky Lindquist of Waterloo, and her daughter and granddaughter were there with him to sign for the prize.

Markham says he doesn’t have anything he really wants to splurge on or buy with his winnings. Markham says he’s going to invest the money and has a lot of different options to look at. “There’s no plans on buying a new house, or going to Europe or anything like that…I’ve got enough right now,” Markham says.

Markham chose to take a payout in cash which amounted to about $5.63-million. The state and federal government took out nearly $1.7-million to leave him with an after tax total of nearly $4-million. Markham says he plays lotto game regularly and plans on winning the jackpot again sometime.