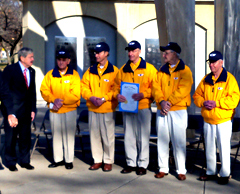 Governor Branstad with the Gass brothers.

Ceremonies across the state today honored those from Iowa who served on this Veterans Day. The annual ceremony at the World War Two memorial east of the state capitol honored five brothers who served together.

The Gass brothers Daryl, Wayne, Warren and twins Roger and Ronnie from Urbandale all served in the military at the same time. Governor Terry Branstad read a proclamation honoring them.

Branstad said the proclamation acknowledged their service to the state and country and encouraged all Iowans to remember our military veterans.

Daryl Gass spoke for the family and said they were honored to be recognized and joked that it was probably only because they were still alive and available for the ceremony.

The five went to Washington last year on an honor flight. Gass says serving in World War Two was something they felt they had to do, and the whole country was behind them. He says it’s tougher on today’s soldiers.

“We thought this was the war to end all wars of course, and it didn’t do it,” Gass says, “I just feel sorry for the people that are going now, because I’m just not sold on the wars we’re fighting right now.” Gass says no matter what you think about the wars, you still should support the troops.

He says he supports them and says they are “there for a good cause” and he says since they are there they should end it. Gass says the country should never give up on the veterans. The ceremony also marked the 15th anniversary of the dedication of the World War Two monument.