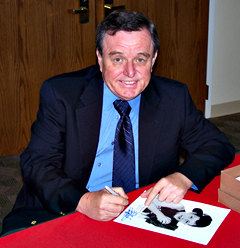 The actor known to millions as “The Beaver” returned to his home state this week. Jerry Mathers, one of the stars of the long-ago TV show “Leave It To Beaver,” was in Fort Dodge on Thursday to talk about a serious subject — being a diabetic.

Mathers says he didn’t take his weight gain seriously until a doctor gave him a physical — and a shock.

“She said, ‘If you don’t do something about your diabetes, you’ll be dead in three to five years,'” Mathers says. “That was a real wake-up call for me. I had no idea about diabetes and knew nothing about it.”

He says the doctor recommended he start losing weight, as he was at least 60 pounds too heavy. Mathers says if young people aren’t taught about portion control and healthy eating early on, they’ll quickly find themselves in the same kind of trouble.

“A lot of it has to do with all the advertising and all the things kids eat,” he says. “There’s a lot more fast food, a lot more candy. You go to a school lunch, you’ll see a lot of things that look delicious but they really put the weight on and pack those calories in.”

The 63-year-old Mathers was the guest of Trinity Regional Medical Center in Fort Dodge and spoke at Iowa Central Community College. He told the audience how to lead a positive life as a result of the disease. He continues to exercise five days a week at his southern California home.

Mathers was asked if he still watches reruns of the popular TV series. “I don’t watch it,” he says. “It’s not that I don’t like it but I just know it too well. It’s like watching an old home movie. How often do you get them out? Mine is a lot easier. I just turn it on. ‘Leave It To Beaver’ is the longest-running show in television history. It’s never been off the air.”

The program first aired from 1957 to 1963 and is still running in reruns in 150 countries in 36 languages. Mathers was born in Sioux City in 1947 but moved to California as an infant.