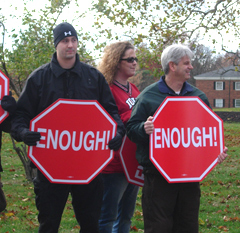 A Mount Pleasant Correctional Facility officer was attacked by an inmate Thursday, just hours before prison workers held a rally to protest staffing levels they claim are unsafe.

The officer who was assaulted was unhurt. He did not want to give his name, but said he feared for his life.

“At the time that it happened, I didn’t know if I had any backup coming or not because earlier we didn’t have anybody available. And that’s the problem – we don’t have enough people to staff, which is causing a lack of being able to train properly…it’s very dangerous,” the officer said.

Doug Buttikofer, a psychologist at the Mount Pleasant facility, said there was also an assault on Wednesday involving two inmates in the special needs unit. Buttikofer claims the lack of staff is making it difficult for workers in the prison to focus on one of their primary goals: rehabilitation of inmates.

“So, when they return to the community they can contribute to the community. We’re directly protecting the public by rehabilitating these guys,” Buttikofer said. “We’re trying real hard to do that, but unless we have a safe environment, we can’t even get to the rehabilitation.” At one time, the Mount Pleasant Correctional Facility had about 390 employees, but Buttikofer said they’re now down to 320.

Similar rallies to the Mount Pleasant gathering have been held recently outside prisons in Fort Madison, Newton and Anamosa. AFSCME Iowa Council President Danny Homan says the legislature provided money to fill 40 security positions across the prison system, but those positions remain vacant.

Homan’s called for an investigation into what he says is a misappropriation of state funds. Governor Branstad has said he believes the corrections department has been treated fairly considering the state’s tight budget.