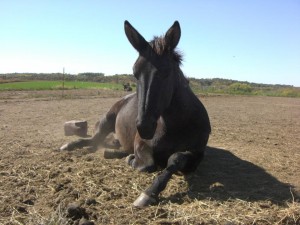 A western Iowa man is working to make a difference in the lives of unwanted donkeys. Scott Shehan is part of a national group called the Peaceful Valley Donkey Rescue.

Shehan has a farm in Mills County near Malvern and says he and his family fell in love with donkeys after visiting a local sale barn, so they started taking donkeys in.

“The ones that we currently have came from the states of Oklahoma, Texas and California,” Shehan says. “They’ve either been abandoned or they were running wild at some point in their life before they were rescued by the folks with Peaceful Valley.”

Shehan says the donkeys are a serious problem in drought-stricken areas.

“They’ve become a nuisance for ranchers down in Texas with the drought,” he says. “They don’t have enough hay for their own cattle and then you’ve got these wild donkeys running loose and they’re eating up what hay they have available for their livestock. They’re trying to pass legislation that would allow donkeys to be shot on sight which is tragic. We’re trying to prevent that.”

Shehan occasionally opens up his acreage, Lusco Farms Rescue, for open houses and donkey adoptions. He says it’s a pleasure to work with people in Iowa and Nebraska who care about these animals.

“We’ve had people donate hay and volunteer time and the people from Peaceful Valley were just shocked when I told them of the outpouring of support we were getting,” he says. “They just don’t see that down in Texas.”

Shehan is still in need of hay donations. He’s also trying to raise money for a tractor to assist in the care of the donkeys.