You are here: Home / News / Rally calls for money to work on roads and bridges 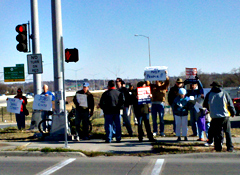 Union workers and volunteers with MoveOn.org staged a rally in Des Moines today to call attention to needed repairs to Iowa’s roads and bridges.

Earl Agan, president of the Central Iowa Building Construction Trades Council, recalled his high school education as he criticized Governor Terry Branstad’s call for waiting at least a year on consideration of raising the state gas tax to fund road and bridge repairs.

A commission Branstad appointed has recommended raising the gas tax by 8 to 10 cents. The governor said this week he’d prefer the Iowa Department of Transportation find efficiencies that would save about $50 million.

The rally was staged alongside a recently rebuilt bridge over Interstate 235. Last month, the group Transportation for America released a report that ranked Iowa third for having the worst bridges in the country. The report shows nearly 22% of Iowa’s bridges are considered “deficient.”