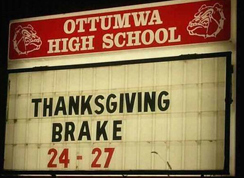 Ottumwa sign that became the focus of a lot of internet talk.

A photo being spread online isn’t helping the image of a school in southeast Iowa.

The picture of the marquee outside Ottumwa High School identifies the dates for Thanksgiving break.

Unfortunately, “break” is spelled B-R-A-K-E. The photo has become the butt of many jokes on Facebook and Twitter, but it’s no laughing matter for Ottumwa High School Principal Mark Hanson. He says two student council members were in charge of changing the sign.

“They were having some fun with that and decided to spell the word ‘break’ incorrectly,” Hanson explained. “I think pictures were taken of it right away and of course it appeared on the Internet and all kinds of places. We have since corrected (the sign) and talked to those students. That was really the extent of it.”

The students were not punished. Instead, Hanson said he simply told the boys how it “reflects negatively” on the school and the town of Ottumwa.

“Heck, it’s one of those things that could show up on Jay Leno…’small town news’ or whatever they call it,” Hanson told Radio Iowa. “It’s not something we would ever be particularly proud of, that’s for sure. But, it happened, we dealt with it and we’ll move on from here.”

Hanson added the two boys, on the same day of the prank, spent three hours taking part in a community project – along with several other students – delivering Thanksgiving meals to some 200 elderly residents of Ottumwa.