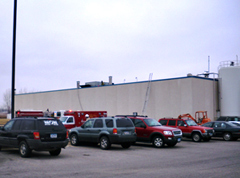 A stuck gas valve is thought to be the cause of the fire at this Mason City plant.

Operations are expected to be back to normal later today after a fire Monday at a Mason City egg processor.

Firefighters were called shortly before 10 o’clock Monday morning to Cargill Kitchen Solutions after a fire broke out, causing thick black smoke to pour out of the facility.