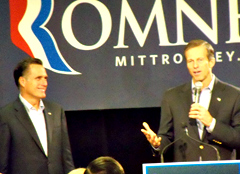 “He’s uniquely qualified to deal with the challenges that the country faces today,” Thune said.  “His experience, his skill set — it will enable him to come into this job and to take on the challenges we face, and they are many.”

Afterward Romeny talked with reporters about last night’s debate and the comments fellow candidate Newt Gingrich made about illegal immigration.

“I’ve said that those people who’ve come to the country illegally should not have a special pathway that is preferable to those that stand in line in their home countries to be able to come to this country,” Romney said.  “…That’s my view and probably by the time this campaign is finished, we’ll all come out with our extensive immigration reform plans.”

Gingrich suggested giving people who have been in the country illegally for 25 years, who have children, go to church and have jobs here some sort of legal status.  Romney was asked by a reporter if that would be giving “special preferences” to illegal immigrants.

“It certainly was for the people (Gingrich) was referring to. He didn’t go on and describe how about somebody who has been here 20 years? How about 12 years?  How about 10? Five or three? How many children do you have to have to apply this principle?” Romney replied. “He didn’t describe that.”

According to Romney, Gingrich has supported amnesty in the past and Romney argued Gingrich “offered a new doorway” to the concept of “amnesty” last night. Romney called that “the wrong course for the Republican debate.”

“We should be talking about enforcing the laws and making sure that those who come here legally and apply legally are those in the front of the line,” Romney said.