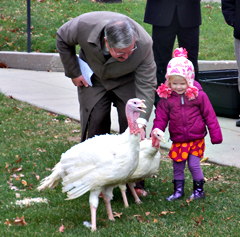 Governor Terry Branstad will deliver his Thanksgiving message today during a service that features period style costumes and customs from the holiday. Branstad and his family will attend the annual “Pilgrim” service at the Plymouth United Church of Christ in Des Moines.

The ministers, deacons, choir and many of the parishioners dress up in 18th century New England costumes to mark the holiday. Branstad says this has been one of his favorite events as governor, as this is an American holiday celebrating our heritage.

Branstad says his kids have enjoyed the service in the past and this year they are all coming along with his grandkids and his uncle Ron from California. The governor says it’s a time to think of those who need a hand.

Branstad says there are still a lot of people in the state struggling because of the economy, and he says they are working to bring more jobs to the state. He says Iowans are a very caring people who reach out to others in their time of need — especially during this holiday season.