You are here: Home / Fires/Accidents/Disasters / Hull city officials looking for home after fire 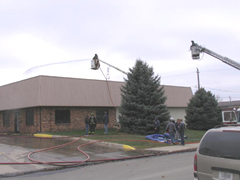 The State Fire Marshal’s office has determined an electrical malfunction in a second floor storage area sparked the fire. The shop area sustained fire damage, while the office area received smoke and water damage. City leaders are saying it will be at least six months until they’re able to use the building again.

So in the meantime, they need to decide where to house the city offices. The city does have another building where equipment can be stored, but they’re not sure where to move the offices. For now, they’re in the Hull Public Safety Building.