An Iowa-based agricultural group has released what it describes as a “tool” farmers may use to evaluate the 2012 presidential candidates.

The Iowa Corn Caucus Project provides letter grades for each of the candidates based on their records on “corn-based issues only” according to Mindy Larsen Poldberg, director of government relations for the Iowa Corn Growers. 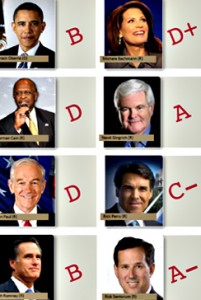 “It’s not an endorsement, but this is something that I think that, you know, everyone in agriculture should look at,” says Kevin Ross, a grain and livestock farmer from Minden who is president of the Iowa Corn Growers Association. “…In my opinion, it’s something that should be used and looked at pretty seriously.”

Ross told reporters he was surprised to see grades for candidates like Michele Bachmann and Rick Perry be as low as they turned out to be.

“That certainly is an issue when you talk about candidates  that are considered a front-runner at that point, if their ag policy is that poor, then we have a problem,” Ross says.

Ross is urging Iowa farmers and others who work in ag-related industries to “educate” the candidates on how they can “improve” their grades in this area.

AUDIO Ross and others from the Corn Growers Association briefing reporters on the report card.

“Ron Paul is the strongest candidate in the field for free and unfettered agriculture with minimum government involvement both in the form of regulations and subsidies,” Ivers said in a written statement. “He is very confident that the American farmer has the ability, on his own, to produce a great product for a great price while being a very responsible steward of the land on which he lives and makes a living.”

(This story was updated at 12:18 p.m. with additional information.)