You are here: Home / News / Gingrich says Obama a “symptom” of the country’s “mess” (audio) 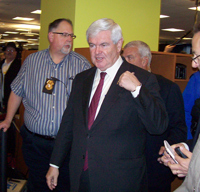 Republican candidate Newt Gingrich says border security is one of the “serious things” he would tackle as president.

“There are dozens of things like this that have to get done for us to rebuild this country,” Gingrich says.

This morning during an appearance in Des Moines, Gingrich signed a pledge, promising to secure the U.S. border with Mexico by the end of 2013. Gingrich has proposed using unmanned drones to fly over the border zone and has suggested sending up to half of the Homeland Security workers who live in the D.C. area to Texas, New Mexico and Arizona.

“We will have absolute control of the border,” Gingrich said.

Gingrich spoke to more than 400 employees of Nationwide Insurance this morning, joking at one point about having UPS and FedEx track packages sent to all the illegal immigrants in America.

“Then when they’re delivered, you pull it up in the computer, you know exactly where they are, and it was done at no extra cost,” Gingrich said, getting laughter from the crowd. “I just want to say for the purpose of our friends in the press, you know that was hyperbole and that is not a serious proposal because the last thing I want to do is have The New York Times write some column about how stupid Gingrich is because he actually thinks you can do this.”

Gingrich repeatedly suggested he would bring ideas from “the world that works” into the federal government. Gingrich also presented himself as the “widest choice in American history” if he is the Republican nominee who challenges President Obama in 2012.

“We need a serious, in-depth conversation about the mess we’re in which is far beyond President Obama. This mess has been growing for 30 years. He is only a symptom of it,” Gingrich said. “Defeating him by itself is not a solution. We need much deeper change than just replacing the president.”

Gingrich is scheduled to speak at the state convention of Electric Cooperatives this afternoon. This evening Gingrich will headline a fundraising banquet for the Polk County Republican Party.