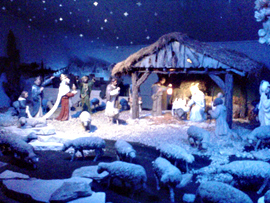 One of north-central Iowa’s gems of the holiday season opens this weekend. The nativity scene created by German World War Two prisoners held in Algona opens for public display on Sunday.

Chickering says it’s a source of pride, not only for the church but for the entire community.

“It is something which is so unique and the story is so unusual and so interesting, for many people, it’s not Christmas unless they’ve come for a visit,” Chickering says.

Eduard Kaib was an architect in his private life and a non-commissioned officer in the German Army when he was sent to Camp Algona in the fall of 1944. Kaib built a small 12-foot-wide nativity set with figures made out of soil that were baked in an oven to harden them.

The camp commander, Arthur Lobdell, saw the set and wanted Kaib to build a larger one for the following Christmas. Chickering says had Lobdell not been assigned to take over command at the camp in the summer of 1944, the larger nativity may never have been built.

He says it’s a heartwarming story since Lobdell could have been assigned anywhere and there were over a million POWs in camps across the United States. Kaib and five friends started working on the new nativity in January 1945, making 60 half-life-size figures, made of concrete over a wire and wooden frame and finished in molding plaster.

The Algona Nativity Scene will be at the Kossuth County Fairgrounds through New Year’s Eve. Hours are 2:00-9:00 PM Monday through Saturday and noon-9:00 PM on Sundays including Christmas Day.