You are here: Home / Military / Iowa soldiers win Army award for their invention 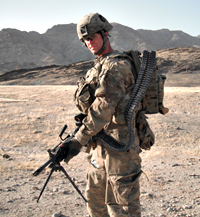 Three soldiers from the Iowa National Guard Second Brigade Combat Team of the 34th Infantry Division recently received an award from the Army for a device they created for a machine gun.

Sergeant Winkowski says they didn’t have an ammo carrier to lug the extra bullets and there was a lull when they had to reload. He says they’d seen ammo carriers in movies and decided to gather up some spare parts to build their own. They took an old rucksack frame and stripped it down, welded together a couple of ammo cans and added a speed loading shoot.

“We took it out to the range and gave it some testing and it worked out pretty good for us,” Winkowski says, “And so we took it into combat, and we got into a big huge fight where we again were outnumbered, surrounded, and it worked out great for us. So right then we new we had something pretty special.”

Winkowski grew up in Bell Plaine and McNew in Reinbeck where both did some work on farms. The sergeant says that background led them to build something they could use in their jobs as soldiers. “You know, call it Iowa problem solving or whatever you want to call it, but absolutely that was kind of the drive behind this, we were constantly trying to make things better,” Winkowski said.

All three were able to attend the ceremony where they were recognized as part of the Army’s greatest inventions competition. He says it was neat to see their invention right up there with some of the top minds in the Army. The Ironman pack has undergone a couple of updates from the prototype and is being used in the field in the southern and eastern part of Afghanistan.

“The units are seeing it, they love it, and more and more units want it, and it’s been kind of hard for them to get it out there,” according to Winkowski. He says officials want to implement the system Army-wide next year and it will also be used by the Marines, Air Force and “anyone who deploys machine guns.”

Winkowski and his two partners are pleased to see their invention helping other soldiers, but more importantly he says it’s good to see the impact the system has on the enemy.  “And I think it’s gonna make a huge impact on their mindset when they are engaging U.S. forces with these system and they are coming up against basically a wall of lead because the tremendous firepower these systems can now give machine gunners,” he said.

The carrier system allows a machine gunner to fire up to 500 rounds of linked ammunition. Winkowski is an eight year veteran of the Iowa National Guard, McNew is a six-year vet and Morgan has been in for two years.