You are here: Home / Crime / Courts / Iowa Chief Justice speaks in favor of cameras in the courtroom 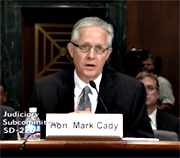 Iowa Supreme Court Chief Justice, Mark Cady spoke out in favor of cameras in the courtroom today in a U.S. Senate subcommittee hearing on whether cameras should be allowed in the U.S. Supreme Court.

Cady told the committee that it is not simply a constitutional question, it is also a public policy question. He says Iowa judges were aware of the concerns raised by some when cameras were first allowed in Iowa courts in 1979.

But instead of causing changes, Cady says the cameras have become a routine part of their job. “We don’t even see the cameras, we don’t even remember that they are in the courtroom,” Cady explained, “We go about doing our business as we have always done our business. And any fear of any problems have always been minimized or eliminated by the fact that the judge or the justices still maintain control of the courtroom.”

Subcommittee chair, Senator Amy Klobuchar, a Democrat from Minnesota, asked Cady if the presence of cameras had any impact on the interaction among the judges. Cady said there have been cameras in the Iowa Supreme Court during oral arguments since 2006, and said he has been on the court throughout that time.

“And I can cite no instance, no example, where in any way that the decision making of the court has been altered by the presence of cameras during an oral argument,” Cady said. Cady admitted that judges are aware of media attention in high profile cases.

“There may be times when I have thought twice about asking a question in a sensitive case, in a case that’s followed closely by the public, but there were time before we had cameras in the courtroom that I thought twice,” Cady explained. Klobuchar asked Cady if the concerns were because his questions would have been reported in some way. “Yeah, you know that work that you’re doing is being followed more closely by more people,” Cady replied.

Klobucher also asked Cady if they were any instances where the justices felt they should not show proceedings on camera. “No….in our supreme court proceedings the only time when we have not filmed something is because we had to shut down our cameras for a period of time because of budget cuts,” Cady responded, which drew a laugh from Klobuchor. He went on to say,”But at no time have we ever thought that this is not a case that is appropriate.”

In his opening remarks to the committee Cady submitted a short video of some past oral arguments. He said the video showed how the arguments are “tough, vigorous, to the point of the issue and illustrated what the courts are all about.”

“And that is digging into the bottom of the issue and…entering a result and a decision that we call justice. And what the cameras do is expose that to the public. And it’s critical in this day and age that the public be exposed to the way that the courts truly operate, not how they are perceived to operate,” Cady said.

Cady was one of five people to speak to the subcommittee of the Senate Judiciary Committee which oversees the courts. Iowa Senator Chuck Grassley, a Republican,  is a member of the judiciary committee and introduced a bill to televise the U.S. Supreme Court proceedings along with Illinois Democrat Senator Dick Durbin.

You can see the entire hearing on the Senate website: www.judiciary.senate.gov/resources/webcasts/index.cfm?p=all>