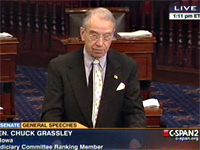 Iowa Senator Chuck Grassley is calling on Attorney General Eric Holder to fire one of his top assistants over federal programs that sold guns to Mexican drug runners.

Grassley, a Republican, said during remarks on the Senate floor today that some 11 months of investigation into “Operation Fast and Furious” led him to the decision.

“It’s past time for accountability at the senior levels of the Justice Department. That accountability needs to start with the head of the Criminal Division, Lanny Breuer. I believe it is time for him to go,” Grassley said.

Grassley explained that the Justice Department denied to him in February and May of this year that A.T.F. had ever sold or “walked” the guns. He said Breuer had been consulted on one of the denial letters, but it was revealed in October that Breuer had known about the program as early as April of 2010.

Grassley says Breuer also knew of another gun operation called “Wide Receiver” that took place back in 2006-2007. “Documents make clear that assistant attorney general Breuer was the highest ranking official in the Justice Department who knew about gun walking in operation Wide Receiver,” Grassley said, “He did nothing to correct the problem, alert others to the issue, take responsibility, or even admit what he knew until he was forced to do so by the evidence.”

Grassley says Border Patrol Agent Brian Terry was murdered by bandits armed with guns as a direct result of this policy, and if Breuer had come forward, Terry’s death may not have happened. Grassley says calling for someone to be fired is not something he does lightly.

Grassley said, “I’ve done oversight for many years and in all that time I don’t ever remember coming across a government official who so blatantly placed sparing an agency’s embarrassment over protecting the lives of its citizens. He has failed to do his job of ensuring that the government operate properly, including holding people accountable. Because of that, Mr. Breuer needs to go immediately.”

Grassley says anything less than firing Breuer will show the American people that the Justice Department isn’t serious about being honest with Congress in their attempt to get to the bottom of the gunwalking issue.