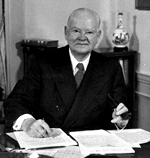 Some 47 years after his death, President Herbert Hoover’s memoirs are finally being published. The near-1,000 page book was originally hand-written by the West Branch native over the last 20 years of his life.

Historian George Nash, a former Iowan, says the massive manuscript, “Freedom Betrayed,” was completed by Hoover just months before he died at age 90 in 1964. Nash, who edited the sizeable tome, explains why it’s never before been released to the public by the Hoover family.

“To publish something so potentially controversial, so likely to stir up controversy with his political foes and the people he criticized so soon after his state funeral, after the respect he had earned in his later years as an elder statesman, would be just an inappropriate time,” Nash says. “Basically, they put it into storage where it has remained until now.”

The full name of the memoir is, “Freedom Betrayed: Herbert Hoover’s Secret History of the Second World War and Its Aftermath.” Nash says it offers a stunning critique of U.S. foreign policy during those turbulent wartime years and the Cold War that followed. 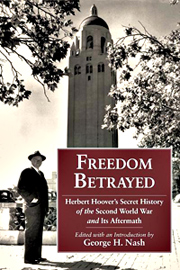 “Time heals all wounds, as it’s said, and now we can look at this volume more through the perspective of history,” Nash says. “I believe the current generation of the Hoover family came to feel it was really time for this manuscript, which Herbert Hoover badly wanted to publish, to see the light and to be seen in a more dispassionate way.”

The president had referred to the memoir as his “last will and testament” to the American people. In the book, Hoover offers blistering reviews of the actions of F.D.R., his predecessor in the White House.

“He was very critical of what he saw as Franklin Roosevelt’s maneuvering of America toward intervention in World War Two and then to our cozy alliance with Stalinist communists during the war,” Nash says.

“Hoover thought that would end up leading to making the world unsafe for democracy and that we would have another world war, which we, of course, call the Cold War.” Nash, who’s spent decades studying Hoover, says the president was not an isolationist but did refer to himself as a “non-interventionist” in American foreign policy.

“His view was that the United States should ‘light the lamp of liberty,’ as he put it, and conserve its energy and resources so that it can create a more peaceful world when the evil tyrants in Europe, Hitler and Stalin, had exhausted each other,” Nash says.

“His view was that the United States should give aid to Britain but it should not become a cobelligerent in the war if it could’ve been avoided. That way, the United States could have contributed to a better world and not, in his words, ‘have made the world safe for Stalin.'”

Hoover reportedly said, years later, referring to Hitler and Stalin, “We should have let those two bastards annihilate themselves.” Nash lived in Iowa City and West Branch from the mid-1970s through 1995, working on a multi-volume biography of the 31st president under contract with the Hoover Library Association.

Nash is giving a free lecture on the book Saturday at the Hoover Presidential Library and Museum in West Branch.