You are here: Home / News / Ron Paul out to “expose” Gingrich record 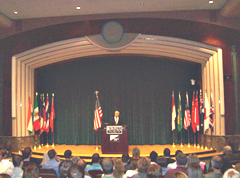 Paul’s campaign is running an ad in Iowa and New Hampshire which attacks Gingrich for what it calls “serial hypocrisy.”

The ad features scary music plus clips from the Rush Limbaugh Show and from a variety of news media reports. When asked about the ad after a speech in Des Moines, Paul at first pretended not to know who Gingrich was.

“Who is that? Who is that? Oh, that guy that used to be the speaker?” Paul said earlier this afternoon, grinning. “I have to expose him for what he’s been doing all these years. That’s all we’re doing, trying to present the facts.”

Paul’s campaign manager says the ad is aimed at “debunking myths” about Gingrich. A spokesman for Gingrich says voters are choosing to support the former house speaker because no one else in the field of Republican candidates has achieved more conservative reforms or spent more time championing the cause of conservatism.