You are here: Home / Human Interest / Drive to raise money to send “SafeTHomes” to Haiti (audio) 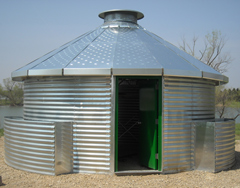 Two state officials are spearheading a fundraising campaign to build a new neighborhood in Haiti for families who’re still living in the open under tarps after losing their homes in an earthquake nearly two years ago.

Each home costs about $6700. Lieutenant Governor Kim Reynolds, co-chair of the effort, says organizers hope to raise enough money to build 48 of them and give each family a thousand dollars worth of high-protein food packets.

“The campaign is uniquely Iowa, assisting Haitians who struggle to attain even the most basic necessities of life,” she says, “like food, water and shelter.”

Pastor Wadsene Anouzar will be the on-the-ground coordinator in Haiti for this “Village of Hope.” He spoke about the project this morning during a statehouse news conference.

“I’ve been in Iowa only for three days and I have learned so much,” Anouzar said. “I have met so many down-to-earth people. I guess I’m going to go back to Haiti a new person.”

Haiti is the poorest country in the western hemisphere. More than 600,000 Haitians who were displaced by the January, 2010 earthquake are still living in camps.

“Despite all the efforts that so many humitarian rights organizations have deployed to help these people, they are still living a very miserable life,” according to the Haitian pastor.

Ken DeYoung of Laurens, Iowa, is co-founder of the Global Compassion Network, the group which has purchased a plot of eight-and-half acres for this new neighborhood in Haiti.

He started flying humanitarian missions into Haiti after seeing the earthquake’s devastation on his computer screen here. He’s been ferrying doctors, nurses and mission teams into Haiti.

“As an American, as an Iowan, I feel a responsibility with the things that we’ve been blessed with and my faith tells me that I need to share the love of Christ through helping those less fortunate,” DeYoung said this morning during a statehouse news conference, “and certainly Haiti has plenty of the less fortunate.”

The new homes for Haiti are converted grain bins built by Sukup Manufacturing in Sheffield. Brett Nelson works at the company and helped design the “Safe-T-Home” that he said can be erected in a matter of hours.

“The 20-gauge galvanized steel construction assures up to 70 years of near-maintenance-free service,” he said. “The design ensures a structure that is extremely resistent to earthquake damage.” 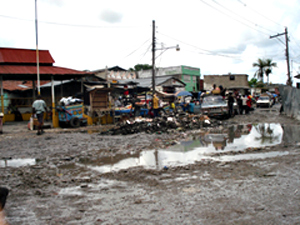 Ballasts or boxes filled with sand are used to anchor the home to the ground and engineers have determined the homes can withstand up to 130-mile-an-hour winds, an important design feature in hurricane-prone Haiti. If those boxes of sand are topped with soil, Nelson says they can be used as vegetable gardens.

Each unit costs $5700 to make at the Sukup plant in Sheffield. Another $1000 will be spent to ship the home to Haiti and lay concrete for the floor of the SafeTHome. Iowa Ag Secretary Bill Northey is the other co-chair of the fundraising effort, which is about a third of the way to its goal.