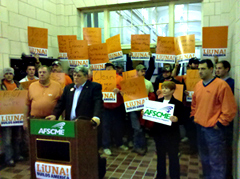 A coalition of unions and environmental advocacy groups held a press conference in Des Moines today to draw attention to the nation’s “crumbling” water infrastructure.

The American Society of Civil Engineers recently gave a D-minus grade to both drinking and waste water infrastructure in the U.S.

Des Moines Public Works Director Bill Stowe is a member of the American Society of Civil Engineers, but said it doesn’t take an engineer to recognize the problem. “The real point of today’s discussion is to try and wake up voters, taxpayers and rate payers to the seriousness of the situation,” Stowe said.

Jim Piazza is executive director of the Heavy Highway and Construction Contractors Association. He said federal funding is needed now in Iowa to make improvements and ensure public safety.

“Much of our state’s underground infrastructure was built 80 to 100 years ago and is insufficient for the growth our communities have experienced over that same time period,” Piazza said. “Our system is badly in need of repair, upgrade or rebuilding.” The coalition is calling on Congress to support President Obama’s jobs bill, the American Jobs Act, as a way to begin tackling the needed repairs.

“When we compare the needs of our crumbling infrastructure — our roads, bridges and underground water systems — with the fact that our nation’s construction industry is suffering double-digit unemployment…it only makes sense, as a nation, we invest in the critical needs of our infrastructure and as a result, put hard working Americans back to work,” Piazza said.

A press release from the group noted 40% of rivers and 46% of lakes in America are “too polluted for fishing, swimming or even aquatic life.” Stowe believes the situation is even worse in Iowa.

“Any of us who’ve lived any place other than Iowa — I’m a native Iowan, but I’ve lived in other places — recognize that Iowa’s water quality is the worst in the United States,” Stowe said. On Monday, a malfunction at a pumping station in Des Moines resulted in nearly 400,000 gallons of raw sewage being discharged into the Des Moines River.

Stowe said the station’s aging equipment was partly to blame. “In this case, it was a 1960s, vintage technology that failed and discharged sewage into the Des Moines River,” Stowe said. “Certainly, it’s an example of if we had more up to date equipment — both in energy delivery and the automated systems that control that – the risk of that happening would be substantially less.”

Stowe and Piazza both criticized federal lawmakers and the field of presidential candidates for focusing more attention on tax cuts and social issues – rather than addressing infrastructure needs that could boost employment.