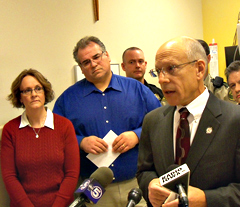 Jan and Mike Rozga listen to Dale Woolery from the Office of Drug Control Policy.

State and local officials gathered in the emergency room of a Des Moines hospital today to send an alarm to parents about the increasing problems caused by synthetic drugs.

The acting director of the Office of Drug Control Policy, Dale Woolery, says the synthetic drugs are legally sold in bright colored packages and parents need to warn kids away from them.

He says the consequences of the using the synthetic drugs can have your child die or end up in an emergency room.

The packages contain one warning that says “not for human consumption,” which is enough warning to allow them to be sold legally.

Samantha Eckstein of Zearing joined Woolery to tell how her son ended up at the hospital after trying something called “100% Pure Evil.”

Eckstein says, “He had been told that this was a legal high and he went with his nephew to an east side (Des Moines) liquor store and purchased the stuff.” She says the clerk told her son how to roll it up into a cigar and sold him the cigar. Her son went to his residence in Des Moines and started to smoke the cigar.

“Halfway through the cigar my son started vomiting, convulsing, fell backwards, started choking on his vomit,” Eckstein explained. Eckstein’s nephew got help, and her son ended up in the emergency room at Mercy Medical Center.

Mike Rozga’s son David took his own life shortly after smoking a substance called “K-2” in June of 2010. Rozga, who is from Indianola, worked to get K-2 banned and has continued efforts to fight the substances.

“Unfortunately our best efforts have not been enough and there continues to be a great deal of misinformation and confusion,” Rozgas says. “This is by design. The manufacturers and retailers simply change their packaging or tweek their formula but continue to sell the same poison. The reality is we are living in a new age of drug sales, dealers have gone mainstream.”

Rozga says his studies have found the methods for making the substances lead to material that varies widely from one package to another, and you can never tell what it is you will get. “Don’t be confused by the packaging or the name on the label. Understand that the terms K-2, Spice, bath salts have become generic terms for these drugs, there are hundreds of different brand names for these substances and what is written on the package is virtually meaningless,” Rozga says.

He says the main message is this: “Don’t inhale, don’t ingest, don’t inject anything…any of these substances can kill you.” The U.S. House has passed a bill supported by all five of Iowa’s congressman that would ban synthetic drugs. Rozga says Iowa Senator Chuck Grassley has sponsored a similar bill in the Senate, but Senator Rand Paul of Kentucky is blocking that bill.

Woolery says the Office of Drug Control Policy is continuing to work with retailers to let them know about the concerns. “And I would call on those retailers who are selling questionable products, as a matter of public safety and because it’s the right thing to do, to stop selling those products. We don’t want teenagers hurt,” Woolery says.

Woolery said he has learned of a store in northeast Iowa that was told about the dangers of selling the synthetic materials and pulled them from the shelf. Samantha Eckstein said she is considering legal action against Super Quick Liquors, which she said sold the material and cigar to her son.