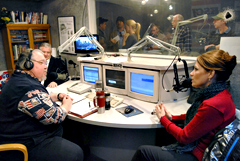 Republican presidential candidate Michele Bachmann is pressing harder in her criticism of rival Ron Paul, saying Paul’s foreign policy views are “absurd”, “bizarre” and a “total disqualifier” for the presidency.

“I couldn’t believe what I was hearing last night,” Clovis said.

Bachmann replied: “It was unbelievable…It’s a total disqualifier as far as I’m concerned…This is so off-base and this isn’t just one thing. This is all foreign policy. I could not disagree with Ron Paul more.”

During the radio interview, Bachmann said she is “walking in the legacy” of Ronald Reagan and Margaret Thatcher.

“I am the national security conservative that beats all the other candidates. I am the social conservative…My bona fides on that are unassailable,” Bachmann says. “The same with being a fiscal conservative. I’m a former federal tax lawyer and I started a business from scratch and I also worked my way out of poverty.”

Bachmann also stressed that she is a “new voice” for the party, a phrase that perhaps highlights her age of 55 compared to Ron Paul’s age, which is 76.

Today’s campaign schedule is perhaps an indication of the position the candidates hold in the polls. Newt Gingrich has no public events at all. Ron Paul is flying to California to tape an appearance on The Tonight Show with Jay Leno. Mitt Romney held a campaign event early this morning in Sioux City. Rick Santorum has a house party scheduled tonight in Sioux City. Rick Perry is stopping in Storm Lake and Cherokee this afternoon.  Bachmann plans to visit the same two cities, as well as make stops in six other Iowa cities today.