You are here: Home / Business / “Traveling” trophies for communities, corporations that win at losing (audio) 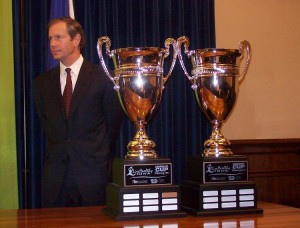 Iowa communities and companies will be able to compete for two new titles — and the winners get a huge, silver “traveling” trophy. The “Live Healthy Iowa” challenge will start January 23, 2012.

“The ‘Live Healthy’ 100-day challenge is a great part of our wellness program at Meredith, in fact we’ve been participants in the challenge since 2006,” says Tim O’Neil, wellness director at Meredith Corporation. “Last year over 70 percent of our workforce participated.”

According to O’Neil, Meredith employees have shed 21,000 pounds over the last six years — including 6000 pounds in the past year alone.  He spoke this morning at a statehouse news conference where the trophies were unveiled and, as leaders from other notable Iowa corporations stood nearby, O’Neil put them on notice that Meredith intends to win the trophy.

“We at Meredith are happy to participate again in the overall program and compete against other Iowa employers in the Corporate Cup Challenge, so Bill, Rick and Laura — game on!,” O’Neil said this morning. “Let’s take the  ‘Live Healthy’ challenge to a new level and another big step to becoming the healthiest state in the nation.”

The healthiest state initiative is Governor Branstad’s brainchild, and he was asked this morning if the statehouse cafeteria might start serving healthier fare.

“That’s a great question,” Branstad said, laughing. “I think that deserves to be looked into, not only the statehouse cafetera, but my daughter and I talked about this — the school cafeterias, too.”

Branstad’s daughter, Alison, is a teacher in Waukee. Branstad, though, does not expect legislators to pass any new mandates for school cafeteria menus, or for the cafeterias in the state capitol complex.

Last year over 30,000 Iowans participated in the “Live Healthy Iowa” challenge and Lieutenant Governor Kim Reynolds said the goal is to have twice as many Iowans participate in 2012.  The Community Cup Challenge can pit cities or even counties against one another.

“The winning community will be recognized in a press conference in May of 2012 and they will be presented with the traveling trophy,” Reynolds said. “Governor Branstad and I encourage all Iowa communities to compete in the Community Cup Challenge to help us meet our goal of being the healthiest state in the nation.”

Listen to the AUDIO of Branstad’s weekly news conference.