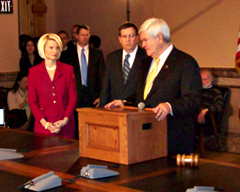 Kraig Paulsen looks on as Newt Gingrich accepts his endorsement.

During a news conference at the Iowa statehouse, House Speaker Kraig Paulsen of Hiawatha compared Gingrich to Iowa Governor Terry Branstad as both, according to Paulsen, have an “intensity of purpose” after being out of elected office for over a decade.

“I think this should frighten the political elite and the insiders,” Paulsen says. “Speaker Gingrich has been out of office for 13 years and he’s had time to develop a plan to get Washington under control and has been able to develop his strategy and his tactics with both a sound understanding of both the theoretical and the practical.”

Paulsen said Gingrich would take on the “power players” in Washington.

“He’s a Washington outsider with a knowledge of how government operates and he is ready to shatter the ‘D.C. Beltway’ status quo with ‘group-think’ that is suffocating this country.”

New Hampshire’s House speaker said Gingrich has the right “track record” and clear goals “for where our nation needs to go.”

A small group of “Occupy Des Moines” protesters attended the news conference and confronted Gingrich, then were escorted from the room. The group trailed Gingrich as the candidate made his way out of the statehouse, with the escort of state troopers and the Gingrich security team.