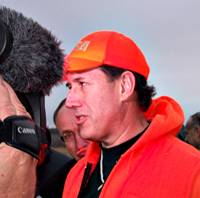 Five GOP presidential hopefuls will be in Iowa Tuesday, but Rick Santorum had Iowa all to himself  today. He went hunting at a private hunting lodge near Adel and bagged four birds.

“There’s only one thing better than getting a bird, and that’s watching your son — in his first hunt — get a bird and he had a lot of good shots today,” Santorum said of his son, John. “We had a lot of fun.”

Santorum’s campaign invited the media to Don’s Hunt Club, private property where hunters like Santorum can pay to shoot pheasants, quail and chukar partridges on the property.  Santorum told reporters he and his fellow candidates are competing for support in the three wings of the party.

“There’s the libertarian primary, which Ron Paul’s going to win, then you’ve got the moderate primary which Gingrich and Romney are scrumming for and then you’ve got three folks who are running as strong conservatives,” Santorum said, “and I think if we win that primary, we’re in pretty good shape.”

Santorum describes himself as a “steady” campaigner who has now held nearly 350 town hall meetings in Iowa.

“I think we’ll see, in the end, that a lot of folks respect that,” Santorum said.

Congressman Steve King was in Santorum’s hunting party, but King still hasn’t decided if he’ll endorse a candidate before the Caucuses.

“I want my head and my heart to come together and when that happens and if that happens, I’ll jump in with both feet and I hope it’s not after the ship’s already left,” King said, a reference to the January 3rd Caucuses, “but it could be.”

“Some people who didn’t get the endorsement are trying to stir the pot to make it, you know, what it isn’t,” Santorum told reporters. “…I don’t know what he said to anybody else, but what he said to me was about as benign a statement as, you know, ‘This is what we would do with the endorsement and this is what we want to accomplish,’ in a sense trying to tell us how significant that endorsement is in the sense that he would not only endorsement but he would try to do some things to make that endorsement have a bigger effect than just going and doing a press release.”

Santorum bought himself and his two sons new guns — Weatherbys — for Christmas and his son shot his first bird with the first shot out of his new gun.