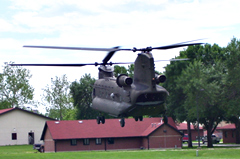 The Iowa National Guard is getting six new helicopters, to replace the six Vietnam-era Chinooks Iowa troops left behind in Iraq.

Colonel Greg Hapgood, a spokesman for the Iowa National Guard, says the Iowa Guard’s old helicopters will be used by soldiers in another state’s National Guard.

“The particular helicopters that our unit from the Iowa National Guard took over to Iraq, those helicopters are staying there and they will go to some other state,” Hapgood says. “We are going to receive new helicopters sometime next year, the newest models, so we’re pretty excited about that.”

Pilots and maintainence crews from a Guard unit in the Quad Cities returned in November after a year in Iraq.

“Because of the versatility of this aircraft, this unit flew five times the amount of hours that they would fly in a typical year over in the Iraq theater simply because we’re pulling all kind of stuff out. They move heavy pieces of equipment. They move a lot of people. They move a lot of supplies,” Hapgood says. “It’s a very critical piece of transportation in that place.”

The Pentagon decided the Davenport-based unit will be getting the newest generation of Chinooks due to the Iowa Guard’s “mission requirements” according to Hapgood. 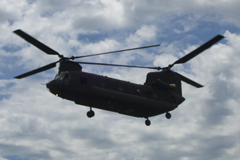 Chinook in flight over Camp Dodge.

“Because of the kinds of operations that we do, the Department of the Army’s determined we’d be a better fit for this new model of helicopter,” Hapgood says.

Thousands and thousands of pieces of American military equipment in Iraq are being shipped to Kuwait where troops are either fixing it and shipping it off to Afghanistan, sending it back to the U.S. — or junking it.

The Iowa National Guard’s spokesman says given the federal budget situation, Guard units have been in “wait and see” mode as to getting new equipment stateside.

“We feel awfully fortunate to get some new Chinook helicopters in 2012 or 2013,” Hapgood says.

Chinook helicopters have two engines — and two sets of rotor blades, giving the aircraft the capacity to haul huge loads. Chinooks are made by Boeing and the newest models can reach top speeds of nearly 200 miles an hour.