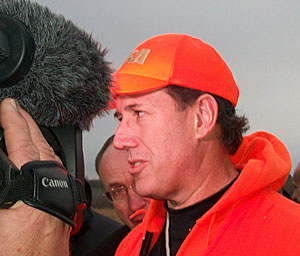 Rick Santorum had Iowa all to himself Monday. He went hunting at a private lodge near Adel. Santorum says he bagged four birds and he told reporters the candidates are competing for support in the three wings of the party.

“There’s the libertarian primary, which Ron Paul’s going to win, then you’ve got the moderate primary which Gingrich and Romney are scrumming for and then you’ve got three folks who are running as strong conservatives,” Santorum said Monday afternoon, “and I think if we win that primary, we’re in pretty good shape.”

Congressman Steve King was in Santorum’s hunting party, but King still hasn’t decided if he’ll endorse a candidate before the Caucuses.

“I want my head and my heart to come together and when that happens and if that happens, I’ll jump in with both feet and I hope it’s not after the ship’s already left,” King said, a reference to the January 3rd Caucuses, “but it could be.”

It’s unclear how many out-of-staters will show up for the “Occupy the Caucus” events this week. Stephen Toothman of Des Moines, a local organizer, says there’ll be a variety of meetings throughout today in an office building a few blocks east of the capitol, with a “People’s Caucus” tonight at 7 p.m.

“People are going to speak out, what we call ‘Soapboxing’ on the issues that are important for them,” Toothman says. “…This is a chance for the 99 percent to be heard.”

A different group of Iowans had a chance to hear directly from Mitt Romney last night during a town  hall meeting conducted over the phone.

“I am going to be going across the state in a bus, so we may get a chance to see you in the neighborhood,” Romney said.

Romney gets to Iowa late this afternoon and will speak in Davenport tonight. Michele Bachmann, Newt Gingrich and Rick Perry are touring the state by bus today, too.