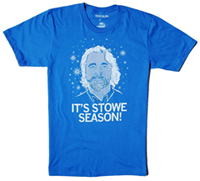 A man who often speaks to the media when there’s a snow storm or flooding in Des Moines is becoming an even bigger celebrity thanks to Facebook and a local t-shirt shop. Des Moines Public Works Director Bill Stowe is a striking figure.

The 51-year-old has long, silver hair and usually sports a beard. Some followers of the “Bill Stowe Fan Page” on Facebook believe he resembles movie star Russell Crowe.

There are more than 1,600 fans of the Facebook group, but Stowe claims he’s never checked it out.

The downtown Des Moines business Raygun is struggling to keep up with demand for a t-shirt featuring the likeness of Stowe surrounded by snow flakes. The shirt reads “It’s Stowe Season!” It’s unlikely you’ll find Stowe wearing his own shirt.

“I have a lot of respect for the folks at Raygun, but having a shirt with my picture on it is zero appeal to me, believe me,” Stowe said. A portion of the proceeds from the shirt sales are being donated to the Des Moines City Employees Holiday Food Basket, a charity chosen by Stowe. He’s been the Des Moines Public Works Director for 12 years.

Stowe grew up in Nevada and attended college in Grinnell. He later secured a law degree and master’s degrees in engineering and labor relations.