Paul, a candidate who is shown to be leading or near the top of recent polls here. During a CNN interview Tuesday, Newt Gingrich said Paul’s total record shows a “systemic avoidance of reality.”

“Think about having a guy running for president who’s going to be to the left of Barack Obama on national security,” Santorum said. 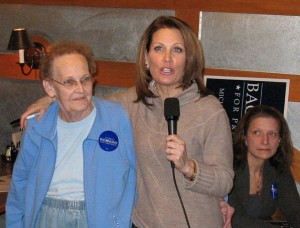 Rick Perry, during a campaign stop in western Iowa, suggested Paul “would allow Iran to wipe Israel off the face of the Earth.” Michele Bachmann also campaigned in western Iowa. During a stop last night in Atlantic, Bachmann said she “took it to” Ron Paul during the last TV debate, over the issue of a nuclear Iran.

Late yesterday Mitt Romney arrived in Iowa and told a crowd in Davenport that Barack Obama is a “pessimistic president” who has failed to deliver on his campaign promises. Later last night, during a radio forum organized by PersonhoodUSA, Rick Perry revealed he no longer favors abortion-ban exceptions for cases of rape and incest.

“All I can tell you is God was working on my heart,” Perry said.

Perry said he talked with a woman who was conceived in a rape after he saw the documentary “The Gift of Life” in mid-December. That conversation, Perry said, sparked his transformation on the issue. The four candidates who were in Iowa yesterday plan to campaign here today, too, with Ron Paul arriving for a noon event in Newton.