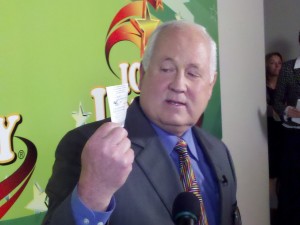 An Iowa Lottery ticket worth over $14 million was claimed Thursday — just a few hours before it would’ve expired. But, a mystery remains.

Iowa Lottery C.E.O. Terry Rich held the ticket in his hand as he spoke at a press conference. “This little baby, we’ve been looking for a while. An hour and 50 minutes before it was to expire, this came in,” Rich said.

The identity of the actual winner or winners, however, is still unknown.

The Hot Lotto ticket, purchased one year ago at a Des Moines gas station, was presented to the lottery by a representative of a Des Moines law firm on behalf of a trust. It’s unclear when officials might learn more about who bought the ticket and why the holder waited until the last day to claim the prize.

“We have no reason to believe that this has any implications of impropriety, except we just got it and we don’t know,” Rich said. “We just want to make sure we keep an open process and keep the integrity as high as possible.” The trust is identified as Hexam Investments Trust with Crawford Shaw, of Bedford, New York listed as the trustee.

The winning ticket now carries an annuity value of $14.29 million and a cash value of $10.75 million. Iowa Lottery Vice-President of Security Steve Bogle is in charge of an investigation into the ticket’s history.

“It’s our intention to find out that this ticket was legally purchased, legally possessed and legally presented,” Bogle said. “To do that, we will attempt to follow the trail from when it was brought in (Thursday) all the way back to the person who purchased it.”

Rich said the money won’t be awarded until that security process is complete. The winning ticket was presented at 2:10 p.m. Thursday. It would’ve expired at 4 p.m.