You are here: Home / News / What are they doing New Year’s Eve? 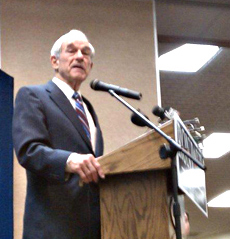 Bowl-watching parties, parking lot rallies and coffee-shop conversations are among the events featuring Iowans, the Republican presidential candidates and the media now traveling along to record every moment.

Mitt Romney began the day outdoors, in West Des Moines, speaking to about 500 people gathered in a Hy-Vee parking lot.

“You know the other day President Obama said, ‘You know, it could be worse.’ That was his line: ‘It could be worse.’ Can you imagine hearing that from a pessimistic president? That goes down with Marie Antoinette (who said):  ‘Let them eat cake,'” Romney said. “He’s in Hawaii right now. We’re out in the cold and the rain and the wind because we care about America. He’s just finished his 90th round of golf.”

Romney stressed his ability to reach bipartisan consensus when he served as Massachusetts governor.

“Good Democrats love America, too. I do remember, however, what Ronald Reagan said. He said, ‘It’s not that liberals are ignorant, it’s just that what they know is wrong,'” Romney said, getting laughter. “And so we have to educate them from time to time and make that they understand how we can work together to get America back on track. I will do that.”

Ron Paul is campaigning in northwest Iowa today. Yesterday afternoon, during a stop in Atlantic, a man in the audience raised an issue Paul has been quite out-spoken about over the years, the question of how much gold is at Fort Knox.

“Would you reveal, as president, whether there’s actually any gold there?” Mitch Henry asked. The crowd laughed and applauded.

“Yes, and if I couldn’t accomplish that then there’s big trouble in this country,” Paul said. “I may need to get some help from you.”

Paul is an advocate for returning to the so-called “gold standard” for U.S. currency and has called for an audit of The Federal Reserve to find out, in part, how much gold the U.S. has.

“There’s a lot of shenanigans (going) on,” Paul said of the Federal Reserve. “They’ll loan the goal and they’ll use it for collateral.”

Rick Santorum has been urging Iowans to “think long and hard” before they vote for Paul.

“The problem with Congressman Paul is the things that most Republicans like about him –which is his bold economic plan and his cutting the government — are the things that he has proven over a 20-year career that he has been incapable of rallying any support to do,” Santorum said in Muscatine Thursday. “He’s passed one bill in 20 years.”

Santorum has been using the word “scary” to describe Paul’s foreign policy views.

“Ladies and gentlemen, this is a very important vote you’re casting here in Iowa — on national security there is no more important. Iowa needs to send a message that we want a candidate that is the Dennis Kucinich wing of the Democratic Party running for president under our ticket,” Santorum said in Muscatine, a reference to Ohio Congressman Kucinich who is known for his anti-war views. “We want a candidate who is in the Reagan wing of the Republican Party.”

Newt Gingrich is also hammering away at Paul.

“The biggest difference that Ron Paul and I have is over Iran. I think an Iranian nuclear weapon is a nightmare,” Gingrich told a crowd in Storm Lake and a man in the crowd said loudly, “Yes.”

Rick Perry started his campaign day today at a pizza joint in Waterloo called “Doughy Joey’s” and this afternoon he’s stopping at the “Fainting Goat” restaurant in Waverly. Perry has been blasting rival Rick Santorum over the projects Santorum was able to win federal money for when he was in congress.

“When he talks about fiscal conservatism, I’m kind of left scratching my head…He is a prolific earmarker,” Perry said in Cedar Rapids Thursday. “…I love Iowa pork, but I don’t like Washington pork and that’s the problem. That Washington pork is the one that we’ve got to watch out for. It’ll give you a stomach ache that lasts for a long, long time.”

Santorum has said he is “proud” of the federal spending he was able to direct to his home state of Pennsylvania, but Santorum promises as president he would reject legislation that contains spending “earmarked” by members of congress for specific projects.

Michele Bachmann campaigned in Sioux City early this morning, then made a stop in Early, Iowa.

Bachmann’s campaign has not released her schedule for tomorrow. Paul is exiting the state after his event in Sioux City tonight and is due back on Monday to campaign here with his son, Kentucky Senator Rand Paul.

(Additional reporting in Atlantic by Ric Hanson of KJAN; in Storm Lake by Joel Herman of KAYL; in Muscatine by Phil Roberts; in West Des Moines by Emily Boyer)