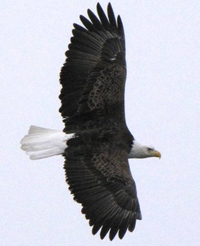 Millions of people saw the famed Iowa eagle cam on-line last year, and now those who are interested can see the national symbol in person.

The mild winter this year, means more open water and the potential to see eagles almost anywhere in the state.

“When it’s open like this, they’re distributed around the landscape much more effectively, whereas when it’s 20 below and the only open water is at the dams because of the movement of the water, you get those major concentrations of 700, 800 at Keokuk,” Schlarbaum says.

He says locations like Keokuk may only have 100 or so eagles this year as they can spread out and find food in other place. Your best bet to see the eagles is in the morning when they look for breakfast.

“I think like all of us, they awaken with the need to get some protein,” Schlarbaum says, “so I suppose the mornings are the best times to see them active, and then perching somewhat later on.” Schlarbaum says eagles will take advantage of road kill and other dead animals away from the water, but you’ll also see them going down and snatching fish wherever there is open water.

Schlarbaum says the eagle watch events will include experts that can answer questions and point out things about the eagles, and they provide spotting scopes. Schlarbaum says the bald eagle camera did make a lot of people aware of the birds that have returned after being wiped out decades ago by pesticide use.

“Oh, I think as they say, (the bald eagle cam) raised all the boats in the harbor, the bald eagle appreciation is nothing short of phenomenal there,” Schlarbaum says. Iowa now has some 300 nesting eagle pairs in the state, along with birds that fly in from other states.

For more information, go to www.missriver.org.