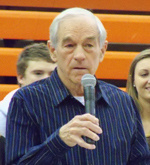 Three of the Republican presidential candidates took time this morning to give a last-second pitch to some of the state’s youngest voters.

Paul got loud cheers and applause when introduced by a Valley student. Paul acknowledged that his campaign has been popular with young people and said one of the reasons is his strong endorsement of the constitution. That includes requiring a president to “be very cautious about going to war.”

“There’s no reason in the world that we cannot be strict constitutionalisms, strong (on) national defense and say that we should not send young people off to war unless it’s absolutely necessary, and necessary for our national security, and a declaration of war is made, make the declaration, fight the war, get it over with and come home,” according to Paul.

Paul told the students he believes their support will help him win. “I am encouraged, especially because I have so many young people supporting this campaign, and because there is so much activity and interest,” Paul said. “We see this as a real opportunity, this campaign and what’s coming up tonight and in the next several months. It’s a wonderful opportunity to restate our sound principles about why this country had been great, and what we need to restore peace, prosperity and liberty to all of us. Thank you very much.”

Bachmann and Santorum did not get as much cheering as Paul, but Bachman did get applause when she asked the students how many wanted to graduate high school and go on to get a great job where they could be innovative and create something new. She held up her I-phone and said it was great example of innovation created since she was their age and had to use an old fashioned phone.

“You’d never make a long distance phone call because it was too expensive, today you walk around with this, you’ve got not only your phone on this, you’ve got your entire music collection, you’ve got music videos, you’ve got instantaneous opportunities to access all the information you could possible access, that’s what you’ve got,” Bachmann says. “That’s because of innovation, that’s what we want to see for your future and the next generation.”

Bachmann says this is the first time the high school students can vote to make an impact their future. “Tonight I’m urging all of you to come out to the Caucuses, because tonight is your night to weigh in and make a difference,” Bachmann said.

Santorum told the students they need to remember that elected officials work for them, and they have to be involved as citizens and research the candidates before voting. “Every decision that’s going to be made in the next few years, whether Obamacare is repealed, or whether it’s kept in place, whether taxes are going to grow, whether this deficit that is now crushing the economy and will crush your pocketbooks in the future is going to be dealt with so you won’t have a lower standard of living,” Santorum said.

“Those are the issues, you need to hold the presidential candidates and members of congress accountable, because it’s your future.” Santorum said most of the students are probably focused on getting an education and then a job — but he says those are not the biggest issues they face.

“Those are short term worries, the longer term problems are the ones that are going to affect you more profoundly. Hold those candidates to the standard of solving the intractable problems of an exploding federal government, of an exploding debt that’s going to crush your economic future,” Santorum said, “Make sure that they stand up and deal with the systemic problems of entitlement, they deal with the systemic problems of a government that is doing more and more and giving you less and less freedom.”

Four of Mitt Romney’s sons attended the West Des Moines event to talk with students. Romney was at another campaign event where he said his final message to Iowans is “jobs, jobs, jobs.”

“You see when it comes to jobs in the private sector, I think it helps to have had one if you’re going to create one, and I have,” Romney said. He paused for applause and then said,”I’ll put a hold on every Obama-era regulation and get rid of those that kill jobs in America.”

The former Massachusetts Governor didn’t mention his opponent Ron Paul by name, but he did play on fears about Paul’s policies towards Iran. “Iran really represents the greatest threat in the world, if it becomes a nuclear nation. Nuclear materials falling into the hands of those entities could uh, could jeopardize people all over the world,” Romney said. Romney’s spending much of his remaining campaign time in eastern Iowa — that’s were he did well back in 2008.