You are here: Home / News / Bachmann: “I have no regrets, none whatsoever” (audio) 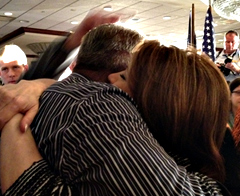 Republican Michele Bachmann announced moments ago that she is ending her presidential campaign.

“Last night the people of Iowa spoke with a very clear voice,” Bachmann said, “and so I have decided to step aside.”

“I have no regrets, none whatsoever,” Bachmann said. “We never compromised our principles and we can leave this race knowing that we ran it with utmost integrity. We made a very important contribution to this race.” 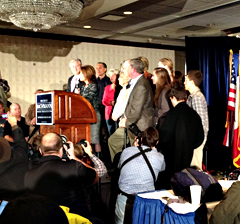 Michele Bachmann drops out of the presidential race.

Bachmann read a brief statement at a news conference in a West Des Moines hotel, hugged family members and supporters who had surrounded her on stage and then exited without taking questions from reporters.

Bachmann was surrounded by the media as she exited the hotel and did not answer questions as to whether she will seek reelection to congress, or endorse another contestant in the GOP presidential race.

Rick Perry announced late last night he was going home to Texas to “reassess” his campaign after his disappointing fifth place finish, but Perry has just announced this morning that he’s going to stay in the race.