You are here: Home / News / Caucuses feature photo finish between Romney and Santorum 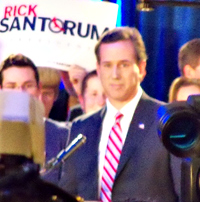 “I think there’s nothing to be ashamed of, everything to be satisfied (about) and be ready and raring to move on, on to the next stop, which is New Hampshire,” Paul, the first candidate to speak last night, told his supporters.

Newt Gingrich finished with 13% support, in fourth-place. “I am delighted to be here tonight and I think that we are at the beginning of an extraordinarily important campaign,” Gingrich said.

But is sounds as if the end may be near for the fifth place finisher — Texas Governor Rick Perry. “With the voter’s decision tonight in Iowa, I’ve decided to return to Texas, assess the results of tonight’s Caucus, determine whether there is a path forward for myself in this race,” Perry said.

Iowa-native Michele Bachmann finished last among the six candidates who competed here, but she told supporters she’s going on.  “Just be prepared, the pundits and the press will again try and pick the nominee based on tonight’s results,” Bachmann said.

“But there are many more chapters to be written on the path to our party’s nomination and I’d prefer to let the people of the country decide who will represent us.”

The drama of who finished first was not decided when Rick Santorum spoke to supporters late last night.  “This has been an incredible journey: 99 counties, 381 town hall meetings, 36 Pizza Ranches,” Santorum said, getting a burst of laughter from his audience. “And you’ll notice I’m not buttoning my coat for a reason.”

“Thank you Iowa for the great send-off you’re giving to us and to the others in this campaign,” Romney said. “This is a campaign night when America wins. We’re going to change the White House and get America back on track.”

(This story was updated after the final tally was announced.)