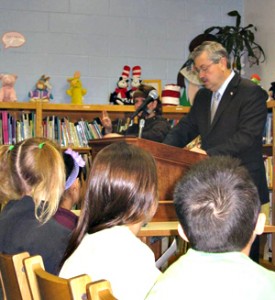 Many of the proposals were first released in October. One of the more controversial pieces remaining in the package would require children to repeat third grade if they fail to pass a literacy test.

“Promoting an illiterate child is far crueler than holding back a child to get them back on track,” Branstad said at a news conference held at a Des Moines elementary school.

Teachers and some school administrators and parents have opposed the idea of holding back third grade students. State Representative Sharon Steckman, a Democrat from Mason City, is a retired educator.

“I think you’ve done irreparable damage to a child sometimes when you hold them back and haven’t given them the opportunity to improve,” Steckman said. Steckman, who serves on the House Education Committee, said studies have shown kids are more likely to drop out of high school if they were held back earlier in their education.

“Research shows a third grader who is retained has a (greater) tendency to drop out of high school…so we need to emphasize getting to that child before that happens,” Steckman said. Branstad insists his proposal would do more, beginning in preschool, to better prepare students to read by the third grade.

“We’re really going to start in preschool, kindergarten, first, second and third grade and make sure if students are falling behind or not achieving like they need to – they’re given remedial help and assistance so they’re up to speed and ready to promoted at the end of third grade,” Branstad said.

Another proposal from Branstad would “make seniority a minor factor” in deciding which teachers should be laid off when a school district is forced to make cuts. “The focus and goal of that is to make sure we have the best teachers in every classroom,” Branstad said. “I think it’s really sad when you have a young, talented teacher who gets laid off just because they were the last one hired, when they may be one of the best teachers you have.”

Teachers would also be evaluated annually instead of every three years, which is the current requirement. Branstad said he will outline how the package would be financed next Tuesday when he delivers the annual Condition of the State Address to the legislature.

State Representative Cindy Winckler, a Democrat from Davenport, is concerned funding to preschools will be cut in half. She said the proposal is part of an Iowa Department of Education budget plan. Last year, Branstad proposed eliminating the state’s free preschool program.

Democrats opposed the move and a compromise was reached to keep the free system in place. “We heard time and time again that preschool (funding) and the fight about preschool was off the table. But, in their proposed budget, they’re proposing to decrease (preschool) funding as a possible option for saving money,” Winckler said. Governor Branstad’s spokesperson, Tim Albrecht, called Winckler’s comments “completely, wholly and flat out untrue.” He said the governor is recommending “no changes” in preschool funding in the coming year.

Branstad’s education reform plan calls for teachers to be evaluated annually instead of every three years, which is the current requirement. Lieutenant Governor Kim Reynolds said principals and superintendents also would be evaluated every year.

“It’s really about ensuring we have the best teachers, the best superintendent and the best principal in every one of these school districts,” Reynolds said. “It’s about leadership and mentorship and it’s ultimately about our kids and making sure we have a great teacher teaching the kids. So, it’s a tool to help them.”

Last month, Branstad shelved a plan to revamp the state’s teacher pay system after heavy criticism from teachers, parents and others. He’s now planning to form task forces to study the possibility of extending the school day or school year and reexamine the teacher compensation issue.

“The change in the compensation system is, I think, clearly the most costly piece,” Branstad said. “It’s also one of the most complicated ones. This is the first year of what we think is really a 10 year process to move Iowa to be ‘best in the nation’ in education.”

The education reform package unveiled today follows around six months of study and more than 30 town hall meetings on the subject. Some of the additional proposed changes would require prospective teachers to finish college with a minimum grade point average of 3.0 and pass several exams to gain a teaching license.