You are here: Home / Crime / Courts / Search continues for missing southeast Iowa woman after her car is found 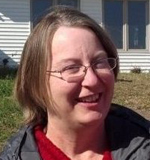 The car of a missing southeast Iowa woman was located over the weekend at an abandoned home near Wright City, Missouri. But, there’s still no sign of 45-year-old Sharon Hopf of Crawfordsville.

Washington County Sheriff Jerry Dunbar says it’s unclear if Hopf was with her vehicle in Wright City – which is located about 30 miles west of St. Louis. “The last time we’ve known that she was seen was at 7 a.m. Thursday (January 5),” Dunbar told Radio Iowa.

“It’s our belief that she was in the car, but for us to stay she was in it…we don’t know at this point 100 percent.”

Hopf, a business owner, wife and mother of two, disappeared Thursday while headed to her furniture store in Kalona. Her cell phone signal disappeared shortly after 7 a.m. and her credit card was used minutes later at a gas station in Ainsworth, along Interstate 80.

Sheriff Dunbar said investigators don’t know if Hopf was the one who used her credit card. “We don’t know at this time. The video system (at the gas station) was off line at that time, so we don’t know if she was alone,” Dunbar said. “It could be that something happened there. She may have been abducted there or she may’ve voluntarily got on the Interstate. It’s right where Highway 218 meets the Avenue of the Saints.”

Hopf’s family has said the stop at that gas station isn’t part of her normal routine. The car, a 1999 white Chevy Lumina, was being brought back to Iowa today. It was searched for evidence, but Dunbar said nothing significant was found.

Searches have been conducted in southeast Iowa and in the area where Hopf’s car was located. Anyone with information about Hopf’s disappearance is asked to call the Washington County Sheriff’s office at 319-653-2107.

Hopf’s family has started a Facebook page in hopes of finding information: www.facebook.com/profile.php?id=14831730#!/findsharon