You are here: Home / News / Protesters present their own agenda after the Condition of the State speech (audio) 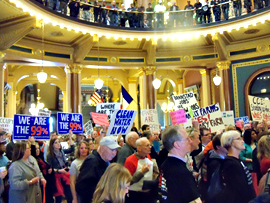 Protesters organized by ICCI gathered at the capitol today.

Hundreds people gathered in the rotunda of the state capitol today for what they said was a response to the governor’s Condition of the State address.

Protesters organized by Iowan Citizens for Community Improvement chanted “put people first” and then “where’s our jobs” as Governor Branstad made his way from the House chamber to his formal office after his speech.

ICCI member Barb Kalbach led the crowd in several cheers and then talked about the reason for the gathering.

“We come here today to set the legislative agenda for 2012, and we’re here to send a message to 150 legislators and to Governor Branstad,” Kalbach said.

The group’s agenda includes: Protecting Iowa’s water, air and quality of life; Protecting all Iowans regardless of immigration status; Standing up for good affordable credit for all; Giving everyday Iowans a voice by removing big money from politics, and not balancing the budget on the backs of everyday Iowans.

Several speakers talked about the various points of the agenda. Danny Homan, the president of AFSCME, the union that covers most state workers, spoke about jobs. 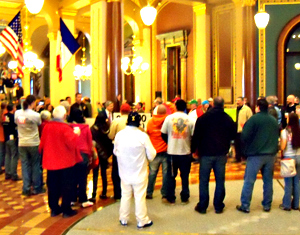 Protesters met Governor Branstad as he returned to his office following the Condition of the State address,

“Where is the compassion? Where is the assistance for the unemployed in Iowa,?” Homan asked. “I see no compassion or concern for the working class, when a governor who talks about creating new jobs closes Workforce Development offices across this state.”

Gloria Aguilar is a small business owner from Des Moines and talked about immigration issues in both Spanish and English. “We want an Iowa were we put the people first,” Aguilar said to cheers.

“We want people first before big corporations.” The audience cheered her again at the end of her remarks.

Bloomfield farmer, Garry Klicker, spoke directly about the governor. “The rich are able to steal our hard-earned money because they own politicians like Terry Branstad,” Klicker said.

“Terry’s reverse Robin Hood theory of stealing from the poor and giving to the rich has been accepted by his party. But now he and his friends are no longer satisfied with stealing our money, now they want to deregulate the corporate industries that poison the air we breathe the water we drink, the land we walk on. The governor’s position seems to be, it’s not enough that we live for nothing, we should also live in filth.”

Following the rally, the group presented it’s agenda to the governor.

The Governor’s spokesperson, Tim Albrecht, issued this response to the rally:
“The governor believes that every Iowan deserves a good-paying job, and a more effective and efficient government. Gov. Branstad today shared his vision for greater opportunity for all Iowans. Those demonstrators today were perfectly within their right to share their ideas as well.”