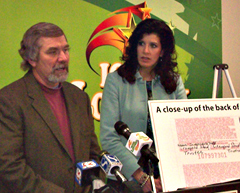 The Iowa Lottery’s security chief says it will likely take “several…days” of face-to-face meetings with a New York attorney and others to get all the questions answered about a winning “Hot Lotto” ticket.

The ticket was sent via FedEx to a Des Moines law firm and turned in at Iowa Lottery headquarters just hours before the deadline.

Steve Bogle, the vice president of security at the Iowa Lottery, says he needs to determine the chain of possession of that ticket.

“Start from where it came in here at the lottery headquarters and follow that ticket all the way back to the purchaser at the Quik Trip that day,” Bogle says.

“I suspect that may take more than a couple of hours to corroborate that information.”

A New York attorney signed his name on the back of the ticket and indicated the winnings are to be deposited in a trust. The attorney had indicated he’d fly into Des Moines this week, but lottery officials say attorney Crawford Shaw’s travel schedule would have allowed him to spend just one or two hours in Des Moines.

“Just meeting with Mr. Shaw is not going to be enough for me to give a recommendation…to pay this ticket,” Bogle says.

According to the lottery’s security chief, there’s been “no credible allegation” that the ticket belonged to someone else, but Bogle says he needs to determine if the ticket at any time was in the possession of an “unauthorized” player. Anyone under the age of 21 or people who work for or do business with the Iowa Lottery are all prohibited by law from playing Hot Lotto and other Iowa Lottery games.

Bogle, along with Iowa Lottery president and C.E.O. Terry Rich, spoke with reporters late this morning.

“Our job is to make sure we’re conducting a fair game, that we pay the right person, that the person hasn’t violated any laws,” Rich said. “That’s not to accuse (anybody of) anything here.”

Lottery officials have reviewed the security video from the Des Moines convenience store where the ticket was purchased, but they’re not saying whether it was a man or a woman who bought the ticket, only that it appeared the person was of legal age to buy it, although that must be confirmed with the in-person interviews as well.

“Our hope that is Mr. Shaw walks in, tells us the story, we make a couple of calls to the people and talk to those people or go out and meet with those people or he brings them with (him) and (lottery security chief) Steve (Bogle) says, ‘Hey, all good,'” Rich said. “Because of the circumstances of coming in late, because of the mystery we’ve all seen with this, it’s our fiduciary responsibility to take an extra step and to see some of that.”

Lottery officials say the ticket is worth more than $10 million if the winner or winners choose a lump sum cash pay-out. If an annuity option is chosen, the 25-annual payments will amount to more than $14 million.

During today’s news conference, a reporter asked about the “who-done-it” mystery surrounding this ticket. The lottery’s security chief conceded this case has been “unique” and Lottery vice president Mary Neubauer said there’s been “overwhelming” interest in this particular ticket.

“Those of us who work at the lottery, if folks know that we work at the lottery, we can barely walk five feet these days without someone asking about this jackpot-winning ticket,” Neubauer said. “…Definitely the public is fascinated by this story and wants to know more.”

The ticket was turned in at lottery headquarters in Des Moines less than two hours before the jackpot would have expired on December 29, 2011. Shaw, the attorney from New York, has indicated he signed the ticket as a trustee of Hexam Investments Trust.

(This story was updated with additional information at 1:05 p.m.)