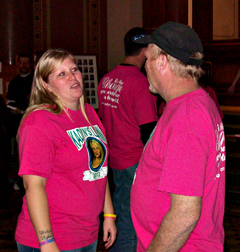 Kari Halverson talks with a supporter at the state capitol.

A northern Iowa woman and about a dozen family and friends were very visible this past week at the statehouse as the group met with legislators, asking for tougher school bus safety laws.

The group wore bright pink t-shirts with Kadyn Halverson’s photo on the front as they met with lawmakers. In May of last year the seven-year-old girl was crossing the road to get on her school bus when she was struck and killed a hit-and-run driver.

Her mother, Kari Halverson of Kensett, is asking legislators to increase the penalty for motorists who pass a stopped school bus that has its lights flashing and the stop-arm out, indicating children are getting on or off the bus.

“We’ve spoken with quite a few legislators and everybody has their own ideas,” Halverson said on Wednesday afternoon. “We’re just trying to figure out what’s going to be best for our children.”

Halverson and her lobbying crew gave legislators a pink binder of information this past week, with a photo of the seven-year-old girl wearing a back-pack — and standing in front of a school bus. This past Wednesday, most of the lobbying crew were family.

Kari Halverson & her son pass the time waiting for legislators.

“My aunt from Cedar Rapids, my dad’s down from way up in Minnesota, and my boyfriend’s family is here,” Halverson said. “And then we also brought my son today to check out the capitol and work on his sissy’s law.”

The boy, who will turn five in a few days, played with toys on the marble floor of the second floor of the statehouse as the adults invited legislators out, one-by-one, to make their case.

Halverson is asking for increased fines and the possibility of jail time for motorists who drive through a stop zone when a school bus is picking up or dropping off a student. She also wants to see cameras installed in all school buses so there’s a video record such violations. Halverson says this effort is part of her grieving process.

“Just to be able to concentrate on something else besides the investigation and the criminal part of the case. It’s been nice to focus on something positive and focus on helping other kids,” Halverson said. “I don’t want Kadyn’s death to be for nothing.”

The 32-year-old man from Northwood who killed Kadyn with his pick-up last year has pleaded guilty to vehicular homicide and faces up to 15 years in prison when he’s sentenced. He has said he never saw the flashing lights on the bus, or even realized the bus was stopped as he passed the bus at what investigators believe was more than 60 miles an hour.