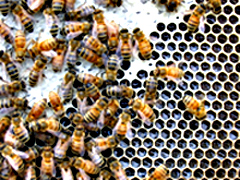 The state Department of Agriculture is launching a series of a dozen beekeeping schools around the state, with a few starting as soon as next week.

State apiarist Andy Joseph says the workshops will run for several weeks and aim to teach Iowans the basics about this fascinating and vital hobby.

“We’re going to start the conversation just by talking about what is a honey bee, what makes it different from other sorts of insects and other bees that are out there, what’s special about it,” Joseph says.

“We’ll also discuss how to assemble beekeeping equipment for those interested in starting out as a new beekeeper, where to get your bees and pretty much everything you need to know to get those bees through a productive first year.” 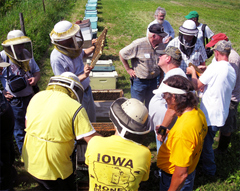 The hobby can become a profitable business. There are about 1,500 beekeepers in Iowa who manage around 30,000 colonies of honeybees.

Those bees produce about two-million pounds of honey every year, a crop worth $3.5 million.

Joseph says it doesn’t take a lot of money to get started. “You’re looking at an initial investment for two hives plus all of the basic equipment you’ll need, it’s going to cost you a few hundred dollars, I’d estimate around $300 for an initial basic investment,” Joseph says.

“That isn’t that much if you’re comparing it to other kinds of agriculture, even keeping chickens yourself.” Honeybees are responsible for the pollination of many Iowa crops.

Joseph says the economic value of honeybees as crop pollinators in Iowa has been estimated at $92 million a year. Joseph has been beekeeping for about 12 years and says the remarkable insects appeal to a broad spectrum of Iowans.

A honeybee on red clover.

“It’s not just your older, male, rural sort of person anymore,” Joseph says. “That stereotype is pretty much blown away. We’ve got urban people, plenty of women are getting into it. Probably over half the people in these courses are women. We even have youth taking up interest, so, all types of people.”

A big tract of land isn’t a requirement for beekeeping. Joseph notes that he once kept bees when living in an apartment building.