You are here: Home / News / Branstad surprised Huntsman dropped out of race 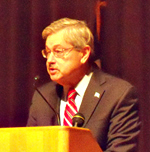 Former Utah Governor, John Huntsman, has dropped out of the race for the Republican presidential nomination after skipping Iowa and then finishing in third place in last week’s New Hampshire primary.

Iowa Governor Terry Branstad, a Republican, says he is surprised Huntsman dropped out so quickly with the South Carolina primary looming on Saturday.

“I told him he made a big mistake by not coming to Iowa, because it was going to be whoever did well in Iowa versus Romney in New Hampshire, and obviously Ron Paul came in second in New Hampshire.” Branstad says.

“I think he could see the handwriting on the wall, and it’ll be interesting to see where it goes. But I think it was a surprise to everybody.”

Mitt Romney won New Hampshire after winning in the Iowa Caucuses by eight votes. Branstad isn’t ready to say Romney has the nomination locked up.

“I would think it all depends on what happens in South Carolina, so we better wait and see what happens. And South Carolina has been very effective at picking the winner in the past,” Branstad says. “It would not be surprising if Romney were to carry South Carolina that a number of the others would drop out.”

Branstad says there’s still a possibility that when the Iowa results are finally certified that Rick Santorum could have more votes than Romney. But he says it wouldn’t change the impact of the voting. “I think both of them got a boost out of it,” Branstad says.

He says Santorum didn’t have the wherewithal to do well in New Hampshire, but he believes Santorum will be very competitive in South Carolina. Branstad continues to decline to endorse any Republican. He made his comments at the Martin Luther King Junior birthday celebration Monday.