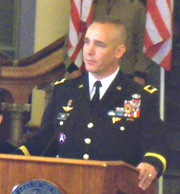 The Iowa National Guard’s adjutant general says the Guard is “tough, resilient” and “adaptable” — attributes which were tested during “unprecedented” overseas deployments of the past decade.

Major General Timothy Orr delivered the annual “Condition of the Guard” address this morning at the Iowa statehouse, referring to the units he leads as “your hometown military.”

As the president and U.S. Secretary of Defense prepare to make cuts in the Pentagon’s budget, Orr made the case that the National Guard is “the most logical option” in “times of fiscal constraint.” According to Orr, the cost of deploying National Guard soldiers is one-third of the expense associated with deploying full-time U.S. soldiers.

Orr argued a large, full-time U.S. military has been the exception during World War II and the Cold War, while the country has been a “militia nation” during the rest of our history. Orr warned “budget constraints and shifting priorities will impact” how the Guard operates and what it is asked to do in the years ahead.

Orr told lawmakers the unemployment rate among his soldiers who returned from active duty assignments in 2011 is now about 10%, down from over 20% a few months ago.

AUDIO of Orr’s 2012 “Condition of the Guard” address.  Orr is the only Guard leader in the country who is given the opportunity to give a speech to state legislators.