You are here: Home / Agriculture / Governor objects to state inspections of electrical work on farmsteads (audio) 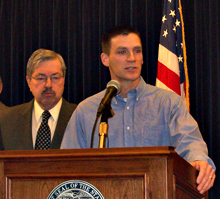 Governor Terry Branstad has filed a formal objection to a state rule which requires farmers to hire a state inspector to review electrical work done on their farms.

Branstad says legislators specifically exempted farmers when they passed a law regarding electrical inspections of commercial businesses, but the Iowa Board of Electrical Examiners over-reached and made it apply to farmers, too.

“You’ve got a board that is circumventing the law,” Branstad says, “and that is what we find egregious and inappropriate.”

By filing the objection this morning, Branstad shifts the burden of proof if a group of farmers file a lawsuit on the matter and the governor says that means the state board will have to prove it had the authority to act despite the way the law was written.

“As I was campaigning across the state of Iowa and talking to farmers I heard a lot of horror stories about this,” Branstad says, “and I asked my staff what we could do.”

The state inspection costs $500. Wapello County farmer Colin Johnson of Batavia says that’s on top of what farmers spend hiring an electrical contractor to do the work — and there’s usually a waiting period before the state inspector can get to the farm.

But Johnson and the governor admit a farmer could perform the electrical work on his own, without electrical training and without a follow-up inspection, if a lawsuit challenging the rule is successful.

“Agriculture and our farming operations are very different than a very public, commercial retail business and I think the law specified that very clearly that is was (to apply) to commercial (operations),” Johnson says. “How many times is my farming operation open to the public: my barns, my grain bins, my facilities?” 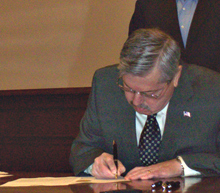 Johnson raises grain and cattle in the Ottumwa area.  Johnson and Branstad made their comments this morning during the governor’s weekly news conference at the statehouse.

A spokesmen for the Iowa Board of Electrical Examiners has not responded to a request for comment on Branstad’s action.