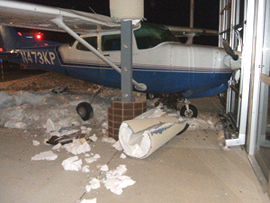 This plane crashed into the terminal at Davenport.

A single-engine Cessna sustained substantial damage when it collided Saturday night with the west side of the airport terminal building at the Davenport Municipal Airport.

The plane is owned by a Wisconsin aircraft sales and leasing firm and was rented to 39-year-old Kevin M. Kadlec of Eagle River, Wisconsin.

Kadlec told cops he was attempting to start the plane’s engine by manually turning the propeller.

He says the aircraft started in motion and taxied about 200 feet to where it hit the building. There was considerable damage to the structure and glass front of the public area. The building was closed at that hour, so there were no injuries. 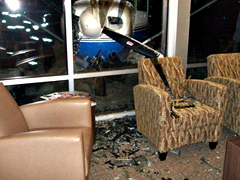 View of the plane from inside.

Cops say there are numerous inconsistencies between what was reported by Kadlec and the evidence present.