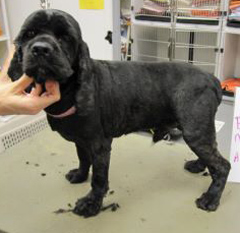 Dog after treatment at ARL.

The Animal Rescue League of Iowa (ARL) was called this morning to help officials in northwest Iowa remove 88 dogs from a property in Sac County. Josh Colvin, with the ARL, says the dogs were living in “deplorable” conditions.

“Deplorable conditions in this case would just be the sanitation was horrible,” Colvin said. “The smell is something you just can’t describe. The matting on these dogs is just remarkable because it’s so heavy and compact with feces. So, it was just a horrible situation for these dogs to be in.”

Charges are pending in the case. The Sac County Sheriff’s office has not identified the exact location of the property or the name of the person who owns the dogs. “I would say that it appeared to be a breeding operation as we had males and females in the same cages and there are a lot of females that are pregnant,” Colvin said.

Dog before treatment at ARL.

The dogs, mostly Cocker Spaniels, have been transported to animal shelters in Carroll, Boone, Des Moines, Cedar Rapids and Sioux City. Colvin said they face a long road to recovery. He calls it one of the worst cases of animal neglect he’s seen.

“Unfortunately, I’ve seen a lot of these type of cases throughout the years, but this is probably up there toward the top just for the simple reason…the smell. It just knocks you over. You never get used to that,” Colvin said.

“And just seeing the dogs, their conditions and how they acted. They’ve probably never been out of those kennels or if they have, it probably wasn’t for very long. So, it was sad to see.”

The ARL is seeking donations of dry dog and puppy food, as well as monetary donations to help cover the dog’s ongoing veterinary expenses.