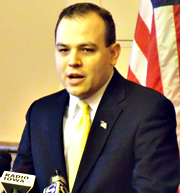 Schultz, a Republican,  says his bill would be phased in over two years to allow everyone to become familiar with it.

He says it accommodates the elderly who might not have a government issued I.D. “Those individuals, number one, if they are in a healthcare facility, they’ll be able to sign an affidavit saying ‘I am who I say I am.’ And they’ll be allowed to vote,” Schultz explains.

He says they will also have a free photo I.D. as well as an attestation to allowing someone else to identify that person. The bill allows students to use any school I.D. that has an expiration date on it.

Those who aren’t students, and who don’t have an I.D., can get one simply by going to the Department of Motor Vehicles and asking for one at no cost.

Schultz says while there has not been a voter fraud problem in our state, the recent video taping in Massachusetts that found people using the names of dead people to vote is an example of what can happen. He says in almost every instance the voter using the name of the dead person was given a ballot.

“What’s important is that we close a loophole, we can’t prove that it’s happening or that it’s not unless we have video-camera surveillance, which we do not. And I think that’s a perfect example of why we need it,” Schultz says. Schultz was asked about the concern that requiring an I.D. will keep people from voting.

Ben Stone, the executive director of the Iowa A.C.L.U. was at the news conference unveiling the bill. Stone says the I.D. bill isn’t needed. “These proposals, this and others around the country, they’re really a betrayal of democracy. Voter fraud is not a problem. If you engage in voter fraud you are likely to go to jail. People don’t want to risk going to jail to give their favorite politician one more vote. This is not a problem.”

Stone says voters should not face an additional challenge to cast their vote. “People often think, well I’ve got to show an I.D. to get on an airplane. Well you don’t have a constitutional right to get on that airplane, but people have a constitutional right to vote,” Stone says. “And the government’s got no right to put impediments in front of people when there’s not demonstrated problem.”

The Republican-led Iowa House passed a bill last year that would have required voters to show a photo I.D. at their polling place, but the Democratically-led Iowa Senate never took it up. Senate Democratic Leader Mike Gronstal is suggesting the proposal will meet a similar fate this year.

“I’d say to Secretary Schultz: If it’s such a good idea and so important to protect the security of the electoral process, how come he didn’t get the Republican Party of Iowa to use it for the Caucuses?” Gronstal told reporters this morning.

The Republican speaker of the Iowa House says Caucuses are party functions, not elections that determine who serves in offices at the city, township, county and state levels.