You are here: Home / Crime / Courts / Fate of 88 rescued dogs still up in the air 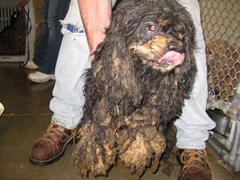 It’s unlikely the 88 neglected dogs, removed this week from a property in northwest Iowa, will be available for adoption anytime soon.

Authorities say the dogs, mostly Cocker Spaniels, were living in filthy conditions with their coats matted in dried feces.

Employees and volunteers at animal shelters in Carroll, Boone, Des Moines, Cedar Rapids and Sioux City have spent hours grooming the dogs and treating them for tooth decay and skin, ear and bladder infections.

Bob Citrullo, executive director of the Cedar Valley Humane Society in Cedar Rapids, says the dogs will remain in the shelters for a while.

“Either the owners of the facility need to turn them over, which is what we would suggest, or if it becomes a legal battle we have to wait for the outcome of that,” Citrullo said. A press release from the Siouxland Humane Society identified the owner of the dogs as Mary Brodersen of rural Kiron.

Officials say Broderson is a non-licensed dog breeder. The release also states five dogs were found dead on the property. Charges in the case are pending. Josh Colvin, with the Animal Rescue League of Iowa (ARL), says donations are needed to help improve the dogs’ health.

He said anyone making monetary donations to the ARL can indicate they’d like the money to help the “Sac County dogs.” The ARL also accepts donations of dry dog and puppy food. in rural Kiron.