You are here: Home / Education / U-I pianos saved from 2008 flood are damaged by water leak 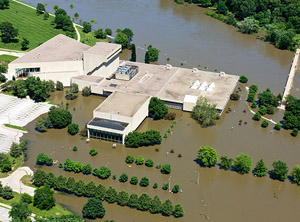 Hancher Auditorium surrounded by floodwaters in 2008.

When record flooding hit the University of Iowa in 2008, several pianos from Hancher Auditorium and the School of Music were quickly moved to buildings on higher ground.

This week, six of those rescued pianos were badly damaged — by a water leak.

U-I spokesman Tom Moore says it’s not clear yet if all six pianos will have to be junked. “We’re going to bring in a restoration specialist to take a look at the gem of the group, the 1979 Model D Steinway, nine-foot long concert grand piano,” Moore says.

“It has been signed by many of the artists who played it on the Hancher stage.” That single piano is worth $120,000, not to mention the value of its many signatures, including Russian virtuoso Vladimir Horowitz, who died more than 20 years ago.

Moore says it’s hard to comprehend how these pianos, saved nearly four years ago from the fast-rising floodwaters of the Iowa River, could have been done in by a leaking pipe to a sink and a toilet.

“This is indeed a highly ironic occurance,” Moore says. “We were doing our best to try to protect these instruments and to have them damaged by water is indeed unfortunate.”

An Iowa City police officer spotted water coming from the storage building early Tuesday morning and reported it, but by the time the leak was traced, the damage had been done.